Deividas Sirvydis is joining the Detroit Pistons on a three-year deal, according to Adrian Wojnarowski. The Lithuanian guard/forward is known for his three-point shooting.

The Pistons traded for the 6-foot-8 Lithuanian wing on the night of the 2019 Draft, sending three second-round picks to the Dallas Mavericks to acquire him.

Sirvydis played professionally in Lithuania last season and averaged 6.6 points and 2.8 rebounds in 15.5 minutes per game. He hit 38.2% of his 3-pointers.

According to Detroit Free Press, Sirvydis is expected to spend most of the time in G League, after taking part in the Pistons’ training camp, which starts on Thursday. 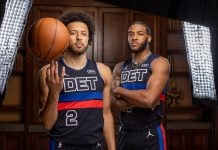