Serbian international Miroslav Raduljica has announced that he will be joining CBA side Shandong Lions.

Raduljica, who spent last season with the Milwaukee Bucks, played for Serbia at the FIBA World Cup and led his national side to a silver medal in Madrid last week.

The center announced his move on Twitter earlier on today.

“Next station in my career is CBA league, I’m looking forward to playing for Shandong,” Raduljica tweeted.

The 26-year-old began his career with Serbian side KK FMP and has had spells in Germany and Ukraine before heading to the NBA to play for the Bucks, where in 48 games he started in two of them.

Raduljica averaged 3.8 points in 9 minutes during his stay. The Serb joins fellow NBA leavers Metta World Peace and Byron Mullins in the CBA this season as well as Justin Dentmon, who played for Zalgiris last year. 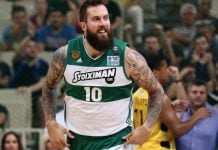