Olympiacos’ fightback from 19 down was not enough for the players of coach Bartzokas to get the win against Baskonia. The players of coach Ivanovic got an important win on the road against the Greeks, 76-90, on Thursday night (26/11).

Zoran Dragic was the leading scorer for the guests with points with Pierria Henry adding another 17. Olympiacos got 15 points from George Printezis and Kostas Sloukas respectively, whilst Hassan Martin and Shaquielle McKissic added 12 points each.

With all points from George Printezis ( 5 points, 1/1 2PT, 1/1 3PT), Olympiacos started the first half with a short lead against Baskonia (5-2). The guests showed from the very first minutes that they stepped on the court to play tough in defense and not give Olympiacos the space to find easy baskets. Baskonia tied the game (5-5) with a three pointer from Rokas Giedraitis ending Olympiacos’ 5-0 run and retaining the lead with another triple from Luca Vildoza (5-8). A triple from Sloukas and and a two pointer from Vildoza brought the game to a two-point lead for Baskonia (8-10), with 5 minutes remaining until the end of the quarter. Alec Peters with the three gave Baskonia a 5-point lead (15-20), to end the quarter a minute later, leading by 8 points (15-23).

In the second quarter Baskonia built a double-digit lead (15-25) scoring from all over the court. The players of coach Ivanovic were extending their lead with Olympiacos unable to score or find solutions in defense (17-30). Baskonia got their largest lead in the first half (21-40) with Olympiacos looking unable to function or do anything that coach Bartzokas would like his players to do. The guests manage to end the first half leading by 16 points, (31-47).

In the third quarter, Olympiacos started with a 6-0 run against Baskonia, trying to find rhythm and get back on the game (37-49), with George Printezis being again the one who’s safely leading his team to a comeback. Kostas Sloukas with a lovely layup made it a 10 point game (39-49) but Baskonia with Pierria Henry stopped the run Olympiacos had made (39-53). McKissic brought on the court the energy Olympiacos was missing in defense, stole the ball and run on the fast break. Hassan Martin was the one who brought the difference to single digits making the game interesting all over again (44-53). The third quarter ended with Olympiacos trailing by nine points, 58-67.

In the fourth and final quarter, both teams had one goal, to take the win. Olympiacos with their confidence up hight from the third quarter, stayed focus and brought the game to a 7-point lead for Baskonia (60-67). An unsportsmanlike foul on Vassilis Spanoulis gave Baskonia a two free-throw bonus and the possession, extending their lead to 11 points (60-71). A three pointer from Zoran Dragic was all Baskonia needed, with Kostas Papanikolaou unable to reply (60-74). Baskonia managed to extend their lead even more to 18 points but Olympiacos seemed ready to make their last effort to return on the game (67-81). With 2:30 minutes on the clock, Olympiacos brings the difference back to 10 points for Baskonia with Shaquielle McKissic encouraging his players that the game is not over yet (71-81). Two in a row triples from Baskonia made it difficult for Olympiacos to return, but didn’t gave up. Despite Olympiacos’ effort to return on the game Baskonia got a much needed win in Piraeus, 76-90. 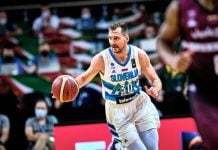 The Eurobasket ended for Zoran Dragic