There was a time when Isaiah Thomas was one of the best players in the league. In the 2016-17 season, he finished 5th in MVP voting and had ignited the Celtics franchise, making them one of the best teams in the NBA to watch. But then after only 3 seasons with the Celtics, the front office decided to trade Thomas to the Cavaliers for Kyrie Irving. And while this trade was going on, Isaiah was undergoing surgery for a hip injury that he suffered earlier in the season. So what is Isaiah Thomas doing now?

The short answer, not a lot. He is still struggling with the same hip injury from almost 3 years ago now and he hasn’t found a team that will keep him longer than a season. From the Cavaliers, he was traded to the Lakers then to the Nuggets, and then to the Wizards. Over the past 3 seasons, he’s only played in 84 games which is mainly down to his hip injury and the time out he’s had for various different surgeries. It’s very saddening to say this, but Isaiah hasn’t even got close to his former self. But this could soon change.

It looks like the Wizards are lining up to resign Isaiah as Isaiah has said that he finally feels like himself again. “There’s no more pain. I’ve got my full range of motion. For three years, I was trying to play the best players in the world on one leg,” Isaiah told ESPN. “Now, I can lift weights. I can squat low. I can work out twice a day. I’m able to cut and move and stop, able to cut and go. I feel like I’m 31 years old again. And now, I have scientific evidence to show that.” This is all very good news for NBA fans.

However, we can’t get ahead of ourselves. He will not immediately return to his former self and the Wizards still have Bradley Beal and John Wall as the starting guards. But that’s not to say he won’t have a role coming off the bench. Isaiah has shown that when he’s healthy, he can be one of the most clutch players in the fourth quarter and he’s historically good at closing out games. I wouldn’t be surprised if they give Isaiah a lot of minutes early on in the season, just see how he plays.

As a whole, I’m thrilled that Isaiah is finally over this injury and I pray that, with time, he’ll return to his former self.

Are there any basketball players who are crazy about online casinos? 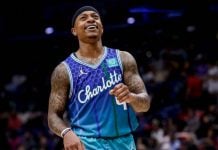 Report: Isaiah Thomas to stay in Hornets for the rest of the season Isaiah Thomas will continue his stint in Charlotte