Steve Ballmer, the owner of the Los Angeles Clippers, is delighted with the decision to appoint Tyronn Lue as the team’s new head coach.

Ballmer went as far as to call Lue the best coach in the NBA. The 43-year-old coach, who led the Cleveland Cavaliers to the championship in 2016, has served as an assistant coach for Doc Rivers this past season.

“Frankly, the best coach in the NBA,” Ballmer said about Lue, per Seasn Highkin. 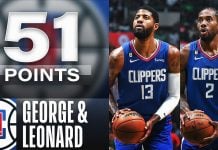 Tyronn Lue: “We know Kawhi, and we know he’s a gamer”