Brown hasn’t been a head coach since the 2013-2014 season when he coached the Cleveland Cavaliers and has been on Steve Kerr’s staff for the past four years.

When the Pacers started their coaching search last week, there were more than a dozen candidates expected to participate in the first round of virtual interviews.

More recently, it was also reported that the Pacers were expected to go after and hire former Houston Rockets coach Mike D’Antoni.

It’s still early in the search and an official decision won’t come soon. 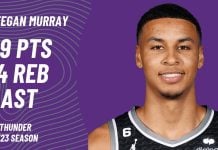 Mike Brown: “It was a fun performance tonight to watch from Keegan Murray” Rui Hachimura responds to whether he requested a trade