Are you thinking of purchasing an Andrew Wiggins, Cleveland Cavaliers jersey? Well, at this time, you can’t. They have been discontinued on NBA Store. The team at TalkBasket HQ logged on hoping to purchase the vest but were let down. A sign, perhaps?

Before the LeBron frenzy, Andrew Wiggins’ Cleveland Cavaliers number 21 jersey was expected to be in hot demand.

But at this time, the NBA.com Store has discontinued the product. While eBay and other auction sites might have it on sale/bid, the official retailer has not.

Number 1 Draft pick, Wiggins has signed a contract with the Cavaliers but still has just over three weeks before he can be traded. It is looking likely that Wiggins will be traded to the Minnesota Timberwolves with All Star forward Kevin Love heading to Cleveland. Love’s representatives are in sole talks with the Cavs at the moment.

Laboral Kutxa forward Pleiss, who was thought to be heading to the NBA next season will opt for more court time at another Euroleague side as he looks likely to ink a two-year deal with the Catalan side paying the €650.000  buyout from the Baskonia club.

Pleiss will be the replacement for Joey Dorsey, who left Barcelona to go back to the NBA and the Houston Rockets.

Ukic, who played for Panathinaikos last season and has NBA experience looks certain to sign by the end of this week. 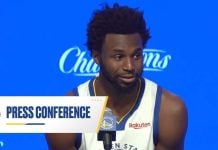