Gregg Popovich is not afraid to speak his mind on basketball and non-basketball related matters. Prior to the game against the Memphis Grizzlies, the future Hall of Famer was asked about Marco Bellinelli’s status.

Popovich had a long lecture on racial and social injustice, before giving up his player’s availability update.

“Our number one priority as far as the country and society is concerned is racial justice, actually racial injustice that exists in our country and trying to make everything just for all people. Just as a reminder, in this world a lot of people really do not understand the breadth and depth of this horrific situation that Black people have been in for so long. And I just want to give you one example. We’re all doing this on our gamedays as we find an opportunity, just so people understand how gross we have been. Not just now, but in the past. It didn’t just happen; it’s been this way for hundreds of years.”

“As an example: Today, 120 years ago in North Carolina a constitutional amendment was approved and what it did was it established a literacy test for Black people that they had to pass before they could vote. White people did not have the same literacy test and it was so gross that they made a rule that if you had a relative before 1863 that had voted, and you’re still illiterate now, you can vote. So that meant White people could vote if they had a relative before 1863 who voted. Well, Black people were enslaved and didn’t have any relatives before 1863 who voted. So they were disenfranchised,” he said, per Royce Young.

“There was a former Confederate officer, William Guthrie, who on the eve of the election made a statement and basically said… this was very necessary to protect the White women, that they can’t go out in the streets and don’t feel safe when they’re alone. We have to keep the quote-unquote colored people away from them. So he emphasized this just on the eve of the election, to make sure that their way would be the rule that people had to live under.”, “Pop continued.

“This sort of activity went on over and over and over again, for all this time. And again, it’s about education and culture, and none of us knew these kinds of things, none of us were taught these things. Black, Brown, Asian, Native American — it doesn’t matter, none of us were taught these things. Hopefully, if people understand how gross this situation really is and how long it’s been this gross, maybe we can make some headway.” 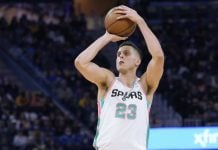