Sports analyst was on vacation for a week and was unable to give his reaction the story that made headlines for some days. Finally, he got the chance to speak about Lou Williams’ visit to Magic City strip club when he left the Orlando bubble to attend a funeral.

Smith, who has said in the past that he might break the bubble rules himself, could not stop laughing when talking about the Clippers guard.

“It was just hilarious to me that actually happened. Not only did he leave, but he went to Magic City. And not even you go to Magic City, you take a picture. And then you got people in your camp trying to deny that the picture was current. But you had on the bubble mask that was given to you in Orlando. You just can’t make this stuff up. This was hilarious. It truly was,” Smith laughed.

Lou Williams on Kawhi Leonard: “He need half the day to get his sh*t together”

Lou Williams agrees to one-year deal with the Hawks 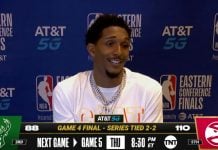 Lou Williams on Hawks: “This team has always been confident in their abilities”

Lakers newcomer Wayne Ellington on teaming up with LeBron James