After sitting out the Los Angeles Lakers final scrimmage on July 27, the status of star big man Anthony Davis is still up in the air.

Davis didn’t practice today, as he is still dealing with his eye injury from the team’s scrimmage on July 25, according to Tania Ganguli of The Los Angeles Times.

On a Zoom call, head coach Frank Vogel told reporters that Davis is still feeling discomfort in his right eye and will be re-evaluated on July 29, according to ESPN’s Dave McMenamin.

“There is some concern that he potentially will not play Thursday, but we’re hopeful that he does,” Vogel said.

The Lakers are set to open their “seeding games” against the Los Angeles Clippers on July 30, followed by the Toronto Raptors on Aug. 1, Utah Jazz on Aug. 3 and Oklahoma City Thunder on Aug. 5. 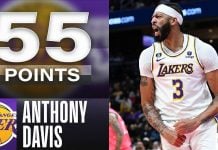