Memphis Grizzlies point guard and Rookie of the Year leader Ja Morant has made physical improvements and is ready to take the next step.

Morant is listed at 6-foot-3, 175 pounds, but that number has apparently gone up after adding 12 pounds over the NBA hiatus.

Zion Williamson apparently isn’t the only rookie who bulked up during the time off.

Morant also believes that his right knee is stronger than ever after arthroscopic surgery last June.

“My knee’s feeling way better — no pain,” Morant said, per ESPN’s Tim MacMahon. “I actually feel like I’m leaving the floor easier and jumping higher. I’ve just been taking this time to focus on my body, make sure everything’s feeling good, so when I go out and play, I’ll be fine.”

Morant has previously mentioned that it has been a goal of his to add strength.

“I’m stronger, can absorb contact and those things,” Morant said. “Able to use my body more, get through different screens. That’s what I was looking to build going to Orlando, to be able to do the things that I’ve been doing before but better.”

The 20-year-old, who will miss his daughter’s first birthday, as he will be playing in the Orlando “bubble”, said he welcomes speculation and doubt around the Grizzlies.

Despite the Grizzlies having a 3.5-game lead on the Portland Trail Blazers, New Orleans Pelicans and Sacramento Kings for eighth place in the Western Conference, there has been speculation that they will lose that last playoff spot.

“We’ve been motivated by the doubters all season long,” Morant said. “We’ll just go out and continue to play our game; don’t live and die by the game. Just play together and try to come out with the win. We’ve been doing that. We’re in the 8 position right now, so going into Orlando, it’s just more motivation, fuel to our fire.” 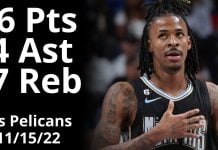