The Brooklyn Nets will be forced to rely on Taurean Prince after Wilson Chandler announced he would not be returning to the team this season.

Both small forwards have gotten extended playing time this season as Kevin Durant recovers from his achilles injury. Chandler replaced Prince as the team’s starting small forwards shortly before the season was suspended.

Brooklyn acquired Prince this offseason in exchange for two first-round picks and Allen Crabbe. He was played well defensively but struggled offensively in his first season with the Nets.

Prince has averaged more turnovers than assists per game and has struggled with efficiency. He has shot 33.9 percent on 3-pointers and 37.6 percent overall.

The rest of this season is an opportunity for Prince to show he can rise to the occasion late in the season and solidify his spot on the team. The Nets signed him to a two-year extension but could look to trade him if he continues to struggle. 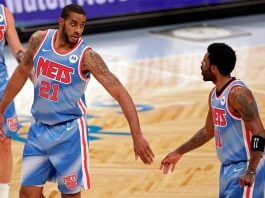