DeMarcus Cousins is understood to have emerged as a target for several NBA teams ahead of the league’s proposed restart in Orlando, Florida, in July.

According to Adrian Wojnarowski, the free-agent center has been rehabbing after sustaining a knee injury in preseason; the player and his agent are carefully considering his options.

“Cousins, he and his agent, Jeff Schwartz – I’m told they’re going to be very careful about where they might commit,” Woj said on ESPN’s Get Up on Tuesday morning (H/T Bleacher Report).

“There’s teams interested, but they’re going to have to find the right situation for him to come back now, because if they can give him another six months of rehab and preparation for next season, wouldn’t rule him out with a team this year, but it’s got to be the right team, right situation or he just waits until a training camp next year with a new team.”

”Oh man, you know I’m trying to push for that,” the guard said during an interview with Marc J. Spears of The Undefeated. “I’ve been on that for like five years. I want to sign him right now. [But] I’m like ‘bro, be smart, take your time to get all the way healthy so you can show these people what you’re all about.’ I want him to focus on that and get back to the Boogie that he was,” Wall said in an interview with 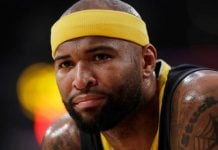 DeMarcus Cousins to Chris Paul: “You wonder why nobody f*ck with yo weak ass”

DeMarcus Cousins on Paul George: “Give this dude his flowers”

Kentavious Caldwell-Pope on getting traded by Lakers: “It was no biggie...