NBA has one idea is to let teams sign players before the season resumes. Eligible players must have been on an NBA or G-League roster at some point this year – even just at training camp. That eliminates a lot of big names but still includes some potential contributors. With this rule, we could see DeMarcus Cousins return, Gerald Green return, Tyler Johnson return, Vince Carter return and Vince Carter farewell plus an Iman Shumpert return.

Fans would like to see a Jeremy Lin return, Jamal Crawford return, JR Smith return, Lance Stephenson return, or a Darren Collison return, but all those players would not be allowed to sign with a new team has not been on an active roster for the 2019/20 season. A.M. Hoops review TOP 5 players to sign before 2020 NBA playoffs: 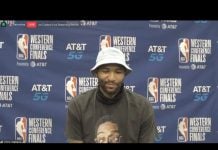 Jeremy Lin willing to pursue another NBA comeback next season Kawhi Leonard out for Game 5 with knee injury