The Bulls shutdown the Utah Jazz at home in Chicago. They won 96-54 to take a 2-1 series lead.

Utah set the record record for fewest points in a playoff game since the NBA began to use the 24-second shot clock.

Michael Jordan finished with 24 points to lead the Bulls. The blowout allowed the Bulls to give a little extra rest to their veteran stars, including Jordan, Scottie Pippen and Dennis Rodman.

The Jazz had just nine points in the fourth quarter and 23 in the second half.

Ironically, in 1986, Jordan scored 63 points in a postseason game against the Boston Celtics.

The Jazz battled back in the series but Jordan and the Bulls prevailed in six games to win their third consecutive championship. 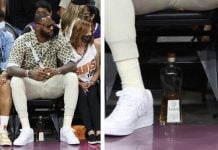 LeBron James brought his own tequila to NBA Finals Game 5

Jason Kelce on Ben Simmons: “All that is because of a...