Boston Celtics star Jayson Tatum has admitted it would have been tough to turn down a $500,000 contract to join the G League instead of going to college but says he might have still played for Duke knowing what he knows now.

The third-year man was the latest guest on Matt Barnes and Stephen Jackson’s All The Smoke podcast and spoke on his feelings regarding the NCAA’s treatment of players and the G League’s attractive alternative. He indicated he’d have definitely taken the latter route if not for the benefit of hindsight.

“It’s tough because knowing what I know now, I think I still might have went to Duke,” the 22-year-old said. “But if you just rewind four years and I’m 18 coming out of high school from St. Louis and there’s $500,000, I’m going right to the G League, for sure. … They need to change in college. I think you should be able to make money off your likeness.” 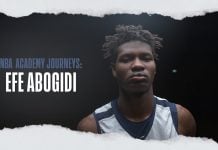