After inconsistent tournaments, how will Turkish national team learn to play constantly at the same level?

The Turkish Basketball Federation has remembered with nepotism during Turgay Demirel’s administration. Everybody in Turkish basketball world knows that if somebody has a good relationship with Turgay Demiral, obtaining a job at federation is much easier for him. The assignment of Ergin Ataman as the new head coach is an indicator of change about this issue. According to the news we heard before, they didn’t have a close relationship.

Both failures and achievements explained by the factors of psychology and atmosphere in the locker room throughout Bogdan Tanjevic era. Nobody talked about lack of technical ability or skill level of the teams after tournaments. Some of the most important players couldn’t take place in squads because of the problems with the coaching staff and federation executives. I admit that not only federation or coaching staff but also players have faults about not playing in national team. When we look at Mehmet Okur’s career,we see an NBA championship and an all-star player. On the other hand, he didn’t have any remarkable success in international competitions because of bad relations with earlier coach Bogdan Tanjevic. At least,we know like that…

The last victim of these relationship issues is Enes Kanter. Looking at all players in Turkey, we can easily say that Kanter is the most talented player of his position and you know his destiny … After signing with the Turkish national team, Ergin Ataman declared that he wants to see Enes Kanter in the squad. Ataman also added that we won’t make plans for future years, anybody in good form will play for them in the upcoming game. This was the biggest problem of former coach Tanjevic. He had rigid rules about every position and player’s role. Therefore,he played with guys who wasn’t in good shape and didn’t deserve to play.

Regardless of off-court issues, the Turkish national team doesn’t have a real point guard who can lead a team to championships. Ergin Ataman must concentrate on this defect and decide his floor general. Moreover, all talented players should attend in squad if they are healthy. Turkey failed at a couple of tournaments, because Turkey didn’t attend with its best players due to off-court reasons. 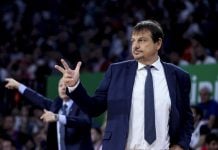 Vincent Poirier reacts to reaching the final of EuroBasket 2022