After a 15-year professional basketball career, Andrew Bogut is close to making a decision on when to call it quits.

Bogut had planned to retire after this year’s Olympics, but the event’s postponement to summer 2021 has thrown a wrench in those plans.

At age 35, Bogut isn’t sure he can go through the required training for the event next summer.

“I haven’t done any basketball since the season ended and it feels good waking up, getting out of bed and not feeling like I’m walking on glass,” Bogut said. “It’s (my career) all been thrown into a washing machine essentially … but there’s a decision to be made probably by mid-May.”

Bogut spent most of his 13-year NBA career with the Milwaukee Bucks and Golden State Warriors.

He also had brief stints with the Dallas Mavericks, Los Angeles Lakers and Cleveland Cavaliers.

He has been a part of Australia’s national team since 2004 and would love to cap off his career with an Olympic medal.

Australia finished fourth at the 2019 FIBA World Cup and Bogut thinks the Boomers will be in contention next summer with Philadelphia 76ers star Ben Simmons planning on suiting up for the team.

“We’ve been tantalizingly close and the squad we’re going to have is arguably going to be the best squad in the history of the Boomers, on paper at least,” Bogut said. “To be part of that, selfishly, is something I really want to do, but the body is what it comes down to. I can get up for a basketball game any day of the week, but it’s hard to get up for five, six days of training a week and lifting weights.” 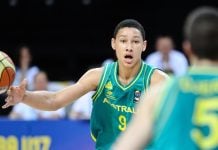