In the round 26 of EuroLeague Turkish club, Fenerbahce and Derrick Williams beat Valencia in Spain with a score of 93:86.

This was the fifth consecutive road win for Fenerbahce and with this victory, both teams have a 12-14 record. In the first clash of these two powerhouses, Valencia celebrated after overtime 100:98, and because of the point difference, Fenerbahce has the tie-break advantage against the Spanish squad.

The pivotal performer in the match was Derrick Williams with 22 points for an index rating of 24. Williams had a couple of outstanding dunks. Luigi Datome and Kostas Sloukas each added 13 while Nando De Colo had 10 for Fenerbahce.

Vanja Marinković led Valencia with 22 points. Bojan Dubljević added 15 while Joan Sastre had 11 for the hosts.

In the next round, Valencia will face ASVEL Villeurbanne in France, while Fenerbahce will host Crvena Zvezda. 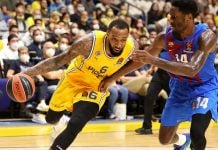 Derrick Williams got stuck at the airport overnight