Updating an earlier report, the Utah Jazz have now decided to remove Joe Ingles from the starting lineup instead of Mike Conley.

Royce O’Neale is still expected to enter the starting lineup for Ingles.

Shams Charania and Tony Jones of The Athletic originally reported that Conley was getting benched, but they noted that “after telling players” of the new lineup, the team opted to shift Ingles to the bench.

Ingles has started 37 of 57 games this season.

He has struggled of late, averaging 6.5 points per game, while shooting 33.8 percent from the field and 30.0 percent from three-point in his last 10 games. 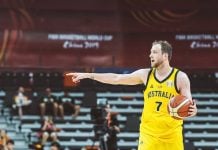 Luka Doncic on being the MVP frontrunner