The March Madness season is set to unveil a few more weeks away. A lot of college hoops are now starting to scout those schools who can emerge as top teams or even Cinderellas for this year’s NCAA season.

Looking into the March Madness tradition, there are 68 college and university teams that will be chosen after a thorough seeding process. The NCAA selection committee is responsible for selecting these teams following their guidelines. A team might be seeded to some considerations such as their overall performance, the opponent type, etc.

This week, reports were handed out, and sixteen teams from four different NCAA regional conferences topped the seeding process. Out of these sixteen teams, eight teams are seen to give out an exemplary performance, playing statistics, and topped the NCAA tournament odds 2020, making them worthy of the NCAA title this year.

Let’s meet this magic eight teams and see if they can be this year’s NCAA superstars.

The Kansas Jayhawks are seen as the toughest team to compete in the 2020 March Madness. According to some sports enthusiasts, the Jayhawks have topped all reviews and rankings for the upcoming NCAA season.

One of the things that make this team a strong contender strong are their player line-ups Bill Self and Udoka Azubuike, who have good defense and offense skills.

The Baylor Bears don’t want to get left behind as they are also one of the NCAA teams that will give a strong head start for the 2020 March Madness. This promising team has a strong line-up of starting players this year, including Davion Mitchell, Freddie Gillespie, and MaCio Teague. All these names were transferees to the Baylors who had been contributing excellent scores for the team.

The Gonzaga Bulldogs have been topping the NCAA seeding for three consecutive years. They are one of those teams who earned the cheers and approval of the hoops. However, despite their popularity, they failed to enter the Elite Eight last year.

For this year, the Bulldogs are hoping for a strong comeback. Hence, they train harder and improve their playing tactics while allowing their front runners  Killian Tillie, Drew Timme, Corey Kispert, and Filip Petrusev to showcase their best shooting skills.

This team is also seen to give out tough challenge plays for the NCAA this season. Vernon Carey, their go-to-player, has been doing great for the team, and is seen as one of their weapons to win the title this year. Duke Blue Devils does best in both defense and offense. They’re in it to win it for the 2020 March Madness.

The San Diego State Aztecs have the most compelling basketball profile since 1990. They were one of those teams in the NCAA that recorded the least defeats. One of the reasons why they are worthy of the NCAA title this year is their key players, which include KJ Feagin, Yanni Wetzell, and Malachi Flynn.

Jalen Smith, who is one of the leading defensive players in the NCAA for the past couple of years, gave the Maryland Terrapins a new ray of hope to bag the NCAA title this year. Aside from that, this team has many perimeter shooters who had been precisely throwing scores for the Terps.

One of the reasons why Seton Pirates are also a strong candidate for the NCAA title this year is the yearly improvement of their performance. Thanks also to Myles Powell has been working hard for the team and showing impressive plays every time he’s inside the court. Also, they have the strongest defensive players, such as Quincy McKnight and Romaro Gill.

The last candidate to make it to the Magic Eight for the 2020 March Madness are the Michigan State Spartans. One of the things their weapons to arm in the upcoming NCAA season is their rookie point guard, Rocket Watts. The Spartans believed that the game is not a one man’s show, so Xavier Tillman and Cassius Winston are also helping out to ace their games.

The ranking and seeding process for the 2020 March Madness is not easy as each school must showcase an exemplary performance in the pre-NCAA season. As mentioned,  the NCAA selection committee has revealed the top four schools from the East, West, South, and Midwest conferences, which made it through a tough seeding process. Out of these schools, eight teams were seen to give out action-packed performances inside the court and might win the NCAA crown this year. Wondering who would win among these eight teams? Let’s wait until the 2020 March Madness will  kick in. 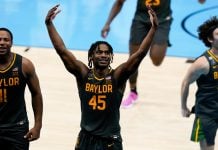 Bronny James, 15, has an offer from Kentucky, 4 more colleges interested