Shamorie Ponds, who was waived from the Toronto Raptors back in January, has signed with Italian outfit Virtus Roma until the end of the season. According to various reports.

From there he went undrafted in the 2019 NBA Draft. After a short spell with the Houston Rockets, Ponds was picked up in October on a two-way contract by reigning NBA Champions, the Toronto Raptors.

He only featured in 4 NBA games for the Raptors, averaging just 2.3 points. Instead, he spent the majority of his time in the G-League, impressing. In 18 contests, 28.1 minutes per game, Ponds posted averages of 14.4 points, 3.8 rebounds, 3.3 assists, and 2 steals.

However, in mid-January Toronto took the decision to release Ponds from his two-way deal. Which has led to him inking with Virtus Roma for the remainder of the campaign.

With his contract with the overseas team lasting just a few months, don’t be surprised to see Shamorie Ponds knocking on the door of an NBA return come the summer. 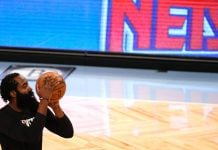 Anthony Davis believes the Lakers could become the next dynasty in...

Knicks’ Reggie Bullock is ready to help the defense

Caris LeVert says Pacers trade might have saved his life after...