The Phoenix Suns aren’t shopping big man Aron Baynes, but the team will remain open to the possibility of dealing him by the trade deadline.

Andre Drummond and Steven Adams remain some of the big names at center, but Baynes is “among the most intriguing.”

If a team meets their trade price, the Suns would consider making a move, according to Marc Stein of the New York Times.

Baynes is in the final year of his contract, averaging career-highs with 11.5 points and 5.8 rebounds per game, while shooting 49.0 percent from the field and 33.3 percent from three-point.

Therefore, his expiring contract and on-court production make him a valuable trade piece.

This creates the question of whether the Suns will be buyers or sellers at the trade deadline.

Trading Baynes wouldn’t completely lessen the team’s playoff chances, but it would be a notable loss in their rotation.

The Suns could look to deal him to a team that is in need of frontcourt depth, as long as the price meets their requirements. 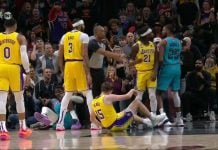