He is also the second Canadian player overall to record a triple-double, joining Hall of Famer Steve Nash.

Nash was born in South Africa, which is why Gilgeous-Alexander is officially the first Canadian-born player.

It was Gilgeous-Alexander’s first career triple-double as well.

Gilgeous-Alexander joins Russell Westbrook as the only guards with a 20-point, 20-rebound triple-double in the last 30 seasons, according to ESPN Stats & Info.

He is also the youngest player in NBA history with a 20-rebound triple-double, passing Shaquille O’Neal, according to the Elias Sports Bureau.

Here are highlights from Gilgeous-Alexander’s performance: 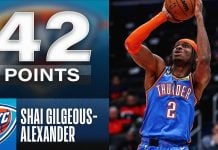 Tom Thibodeau says the only way to slow down SGA is ‘you gotta guard him with your team, and you gotta try to make...