A Happy New Year to you all!

B-Ball Potpourri is back on with some entertaining videos from around the world to please your day at the office, at home or wherever you may be.

A Happy New Year to you all!{jathumbnail off}

B-Ball Potpourri is back on with some entertaining videos from around the world to please your day at the office, at home or wherever you may be.

First off, we all know J.R. Smith is probably not the easiest guy to deal with.

Still, he gets outshined off the court by his sister: 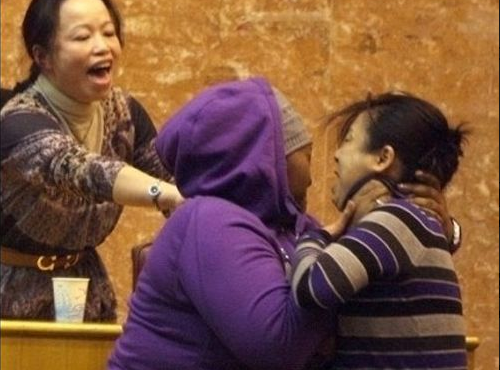 The CBA has been riddled in the past by a lot of fights on the court. Now, with setting up strict policies for players’ behaviour, the fights seem to turn into the stands. Maybe with his sister causing trouble for J.R.’s team, he may be fired because of that after allegedly faking injury did not help him to leave China for the Nuggets earlier on.

You may not know Nazr Mohammed’s younger brother Alhaji, and even if it looks like he plays for the Wizards on the pic (He’s on the left)…

…you may know him now for elevating high these days. Check out his dunk in the Kuwaiti league last week.

Mohammed is not a total stranger to the basketball world, since he played for years in the European circuit (Netherlands, Germany, Spain and France), so this comes not as a surprise to me, since the Kuwaiti league may not be the elite league around the Middle East.

If you seen the fans sitting next to Delonte West

you may wonder who looked more thugged out…but they are actually wealthy shop owners who are supporting their hometown-team the Pistons.

Well Detroit is Detroit…not L.A. or New York, as these two actually reminded me of Jay and Silent Bob.

Baron Davis should be back soon on the court after having trouble with an exotic injury. Known for being a tough guy, Baron may sneak past his defenders after intensively preparing for the Current NBA season these days.

We had the chance to attend his boot camp drills right here.

Maybe due to the U.S. recession, maybe just due to the love of the game, a lot of U.S. American players end up somewhere around the world to play hoops.

Just recently, I found forward Jachim Wettstone (University of Toccoa Falls) playing professionally in Uganda, which is in East Africa and is not known for being a hotbed for pro players.

Former-NBA player Julius Hodge who represented Antigua & Barbuda in the Caribbean Basketball Champs last summer and duelled with Washington’s No. 1 draft-pick John Walll in North Carolina, is now in Vietnam to play for the newly created “Saigon Heat”…that’s what I call “global game”!

Talking about global game, Omer Asik is a heck of a flopper…NOT! Maybe he should hook up with Anderson Varejao to sharpen his flopping skills. Kyle Korver may join them two at anytime.

We all love birthday cakes. Well in Utah, even the mascot may gets his eyes fixed but can’t really handle a cake. Drop its like its hot.

No, it’s not a wrestling-star. And no, he is not hustling for a free hamburger with those two Vipers- players… Special Agent No. 00 is suiting up after years of abstinence and who knows, maybe we see Greg back with the Jazz. He knows at least how to handle cakes the right way.

Sonny Weems does what he can do best, which is to dunk. This time, he took the “W” with a spectacular one!

Finally, for keeping you motivated for the next games of the Euroleague, here are some stellar buzzer-beaters.

Spain and France are directing most African nations in 2011