A couple of the missing players (Dhifallah, Bechir Hdidane and Hamdi Braa) are probably at home and are biting into their nails for not being part of this year’s team. After going through political changes in the last months in which the league had to be suspended for some time and where basketball has been basically non existent, the Tunisians quickly jumped back on their feet and laid the ground-work for their success by conducting several stages of preparation abroad. 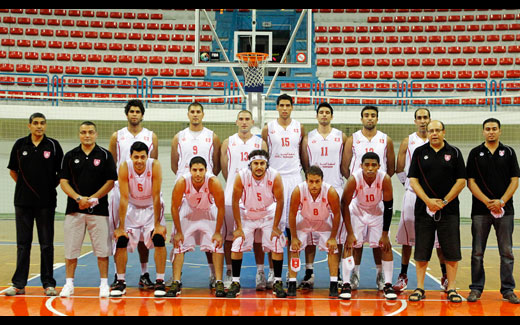 The professional preparation and the exceptional commitment of its players and coaches gave Tunisia the edge over other participating countries. Adel Tlatli’s team-oriented vision of hoops finally brought him international fame and the crown of Africa.{jathumbnail off}

Angola fired French-coach Michel Gomez during the tournament, inserting Angolan-coach Jaime Covilha and went on to make it to the finals. Adel Tlatli and Ayo Bakare guided their teams to the medal ranks. Lazare Adingono came in seventh with Cameroon while Hassane Hachad placed eight with Morocco out of 16 teams. There was no African coach involved with the nations below the quarterfinals. To know the players and their mentalities, their habits and their needs is sometimes essential to guide them the right way and towards success.

ONE microphone and 40 games in 12 days…Liam Canny did an incredible job of commenting the games for FIBA TV and gained a lot of respect for feeding us with inside news and his view of what was going on the floor. Even when the lights went out in Madagascar due to one of the many power-outages, the Indiana-born Canny did everything to entertain his followers on the web. Chapeau!

Since the federation failed to send teams to the U-16 boys and the U-19 women African and World Championships because of the lack of money (The ministry of sports solely sponsored Nigeria’s football teams instead), players made it to Antananarivo by paying everything out of their own pockets. Unthinkable in the world of football, but “D’Tigers” did it and made the country proud by taking the bronze medals home and may even qualify next year for the Olympics in the additional qualifying tournament. Congrats to Nigeria and Big Olu!

Although their only win came against South Africa, the “Malgasy” entertained the masses with a lot of spectacular plays, which reminded me of my streetball-games back in the days. Charles Ramsdell played his heart out for the country and electrified the fans and did everything he could to put his adopted country on the basketball-map. Hopefully, the federation is going to use all the generated hype surrounding the team and the championships to build up their basketball program and to raise the level of play on the island within the next years.

Olimpio Cipriano’s absence coupled with the lack of fresh blood hampered the Angolans throughout the tournament. Firing your coach after a win and during the African Championships is a sign of desperation. First the loss to Senegal, then a more than lucky win over Cameroon made it clear to the other nations, that the long-time champions are beatable. Still, the back-to-back champs made their way to the final where they lost to the best team in the championship. Now, the country faces a difficult task to qualify for London, as the Additional Qualifying Tournament organized by FIBA in July next year will be stacked with high-profile teams from Europe, Latin America and Asia. Maybe with Olimpio Cipriano and Divaldo Mbunga back for good, the Angolans have an outside chance to make it. Still, its future in basketball is descending.

Deciding on a day-to-day base how the next day’s schedule is going to look like is clearly unprofessional. I never saw a FIBA-sanctioned tournament where the schedule has not been published prior to the tournament. Checking every day the website for an update can be really tempting. In the end, Cameroon stepped up and revolted against it by not showing up for their classification game against the Central African Republic. Imagine the look on Lazare Adingono’s face, when he got the news that his team was supposed to play the next morning at 9 o’ clock after they went against Angola the night before into over-time. Whoever decided on all of this did quite a poor job compared to Libya 2009, from which I also remember the game- coverage on the official website was more into depth and written in proper English as well as FIBA TV did not change it’s web presence in between such an important tournament.

The practice gym, which was not supposed to host any games, had to be used due to the consequent re- scheduling of the organizers. Take a look where Senegal earned its fifth place:

Paco Garcia, head-coach of the Central African Republic, described the situation as follows: „FIBA Africa would be doing well in attending regional tournaments for Kids in Spain to understand and learn how to organize a tournament. The frequent changing of times, pairings and the whole system of competition compared to what has been communicated in the initial draw made it impossible for us to prepare for the next game. Another problem is, that the hotel is 45 minutes away from the stadium and traffic is quite chaotic, so arriving on time is really demanding.”

Adding to Madagascar’s defence: The country stepped right in, when the political turmoil in the Ivory Coast made it impossible for the Ivorians to hold the African Championships this year. It had not the time to do all necessary adjustments like having a second gym in place and their effort has been great to host all the nations in a proper way. Still, the chaos will be remembered by many.

Instant success – That’s what Rwanda was looking for back in 2007 and 2009 when they added several U.S. American and African professional players to their national-team roster. Most of these players that competed in Madagascar 2011 got their new identities just before the African Championships in Libya 2009 and they went away with the ninth place, although playing illegally with players such as “Carlos Mugabo” (in reality Carlos Monroe) or “Amandin Rutayisire” (DaMarcus Ellis). This time, U.S. players like Robert Thomson, Matt Miller, Kenny Wilson as well as Brazilian Thiago Cordeiro returned but FIBA prevented the Rwandan Basketball Federation to register new players. Coach Kavedzija had also to cancel the country’s preparation stage in France and their performance this year brought only one win out of four games. Hopefully, the country finally believes in it home-grown-players, especially with their intention to host the next African Championships in 2013 rather then calling up mercenaries for money.

The last minutes of the games are just thrilling. And unfortunately, the ref called a foul on Bitee, even though the Angolan player was flopping in the scene. Also, Angola took too many time-outs even though they had none left (Not seen in the video). But still, Cameroon could have made it, if Franck Ndongo would have left his fingers off in the final seconds of over-time.

Spain and France are directing most African nations in 2011