It’s one of the most interesting questions I’ve heard in years, and Rick Barry and Cyrus Saatsaz discussed it on their “Bleav in Warriors 24” podcast a few days ago. I’m referring to an activity that occurs between foul shots: the ubiquitous physical contact between the shooter and his teammates during games in the NBA and elsewhere.

Barry, an exceptional free-throw shooter during his legendary career, chalked this up as something that fits into the show’s “It Drives Me Crazy” segment.

“Who in the hell is the person that started this BS of going in and slapping a guy’s hand and doing something after free throws, especially one he misses,” Barry said. “If the guy misses the free throw, for you to go in, smack him in the freaking head, not in the hand. He missed a damn free throw and cost you a point!

“It’s the most ridiculous thing I’ve ever sen in my life, and I don’t know where it started. If you have an idea of where it started, Royce, please clue me in. Because whoever that person is, they should be punished.”

“Seriously, I mean what the hell are we doing here? Barry said. “The whole thing we just talked about here is, what? Get focused in, get to what you’re doing. Why do you want to want to bother a guy who should be getting focused in at the line, especially if he made the first one to have to worry about slapping the hands of his freaking teammates?” 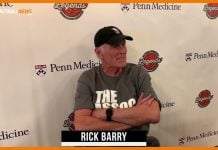 Rick Barry made his NBA debut on this date in 1965