In soccer-mad Italy, the land of the four-time world champions, few things can rival the locals’ love for calcio. The game transcends its sporting nature and pervades nearly all facets of life.

Well, when a young man falls in love with a girl of his dreams, he expresses his affection by scribbling a graffiti on the wall of her apartment building that reads, ”You’re as beautiful as a goal scored in the 90th minute!”

Translated into “plain English” this means, “Honey, you are the source of boundless joy!”

However, one man recently made the Italians forget about the football craze for a moment, and urged an unidentified Virtus Bologna fan to rephrase that message into “Sei bella come un assist di Miloš” (“You’re as beautiful as an assist by Miloš”).

The meme, apparently pasted onto the same building’s wall with the help of PhotoShop, was incendiary and the fire spread quickly across social media and beyond.

The marketing response was immediate – just days after the message hit cyberspace, the Bolognabasket website launched sales of a T-shirt bearing the same slogan.

The proverbial Miloš is Miloš Teodosić, the 32-year-old playmaking wizard wearing the number 44 jersey in one of Europe’s most storied basketball teams and two-time continental champions.

So far, Teodosić’s effort to restart his career in Europe after a string of injuries had marred his 17-month stint in the NBA, has been nothing short of spectacular.

He has led Virtus to a perfect 9-0 record in Lega Basket Serie A and an almost equally successful EuroCup campaign, delivering every night his flamboyant, eye-catching performances.

If the team, coached by Saša Đorđević, wins the next four games in the Italian league, it will have tied the club record for most consecutive victories (13), posted by Ettore Messina’s squad in the 1997/98 season. The all-time best start belongs to Montepaschi Siena, which won 19 in a row in the 2008/09 campaign.

Whether wearing the jersey of FMP – a Belgrade suburb club that had served as the launch pad to his stellar career, Olympiacos, CSKA, L.A. Clippers or the Serbian national team, Teodosić was a fan favorite everywhere. He has quickly won over the Virtus fans, too, with his exquisite passing, long three-pointers and buzzer-beating game winners.

The “Black V” faithful recognized him as their new hero, and Miloš inevitably drew comparisons with fellow Serb Predrag “Saša” Danilović, who earned the status of a Virtus legend after leading the team to its first ever European title in 1998. Today, Teodosić personifies the fans’ hopes for the rebirth of a franchise, which has struggled ever since to reclaim old glory.

Teo, as he is fondly called in his native Serbia, has all the tools to help his new team accomplish this goal. He’s a prolific scorer, a clutch shooter never shy of taking responsibility in decisive moments, an excellent reader of the game and a coach’s “extended hand” on the floor. Above all, he’s one of the best passers this sport has ever known.

When he was asked once why he preferred passing to scoring, Croatian great and three-time NBA champion Toni Kukoč quickly replied, “A basket makes one man happy, an assist – two.”

Despite being able to rain threes and score by bucketload, Teodosić apparently shares Kukoč’s philosophy and truly enjoys making his teammates better. A mixtape displaying his passing skills offers a myriad of ways to share the ball, and almost every single one of them is highly aesthetic. It’s a pity his arrival in the NBA was so late – had he jumped across the Atlantic in his prime and perfectly healthy, his footprint in the world’s top league would have been a lot deeper.

Back in Europe, he is his old self. Whether throwing a simple off-the-dribble pass, bounce, alley-oop, no look, behind-the-back, through-the-legs, full-court “quartberback style”, or ANYTHING else invented by man to get the ball to another man, Teodosić draws sighs of those watching, as he marries efficiency and precision with elegance and beauty.

His Serbian teammates surely missed him this past summer at the World Cup in China. Sidelined by injury, he had to skip the tournament that most analysts had tipped his nation to win. Then he had to watch painfully as those hopes were dashed after Serbia lost in the quarterfinals and had to settle for the fifth place. The team had many stars, but lacked its vocal leader who was never shy to raise his voice on the court or during timeouts (and even throw in an expletive or two) if he felt the effort and dedication were not there and the squad needed a verbal “shove” to get going.

Next June in Belgrade, with Miloš hopefully back in the squad, the “Eagles” will compete for a spot in the Tokyo Olympics basketball tournament. If they succeed, it will probably be Teodosić’s last appearance at the Games.

Meanwhile, he has a job to do in Bologna. His recent heroics in the black jersey indicate that the trophy drought at the legendary PalaDozza arena could soon be over. Twelve years have passed since Virtus celebrated its last domestic title, and the EuroCup effort seems even more important as the tournament finalists will earn promotion to the EuroLeague.

The Italian media went even as far as to predict that regardless of the outcome of Virtus’ EuroCup campaign, the Bologna-based team is highly likely to re-enter EuroLeague next fall as a wild card holder. Whether Virtus secures a return to Europe’s most prestigious club competition on the floor or in the boardroom, it’s a win-win situation for all those who admire Teodosić’s skills.

After all, the most creative artist should perform on the biggest stage, shouldn’t he?! 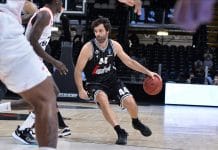