After the first round of games in the Additional Qualifiers for Eurobasket, the advantage goes to Finland and Portugal, while Hungary are left with a mountain to climb.

The first week of games have been completed. Portugal and Finland share top spot with a win each, while Hungary are without a victory from their two games.

Portugal came from behind in Coimbra to record an opening day 71-66 victory over the Hungarians. After taking their first lead in the early stages of the third quarter, Miguel Miranda, who led Portugal with 18-points drained back-to-back three-pointers to balloon the hosts lead to 51-43 and they extended that further to 54-43 when Joao Santos buried another shot from three-point land.

Portugal maintained their double-digit advantage until Hungary fought back with 2:44 left on the clock.

A mini revival, which saw Portugal lose concentration at times on offence was capitalized with baskets at the other end, capped off with a three by Peter Lorant to reduce the deficit to 69-66 with just 33 seconds to go.

Thankfully for Portugal, it was the final Hungary score, as Adam Hanga missed a golden opportunity for the Hungarians which Miranda punished with a jumper to give Portugal breathing space, and an important win.

Looking to bounce back, Hungary were looking to overturn many people’s favourites to top the additional qualifiers Finland.

Finland though put in a blistering performance in the third quarter, going on a 21-5 rampage to take a 61-49 lead at the end of period – Hungary were stunned.

All the drama unfolded in a pulsating final stanza as Hungary, again fought their way back as they reeled off 15 unanswered points, mainly through Obie Trotter, who had six points and Akos Keller, who grabbed five in a run that seemed to swing all the momentum Hungary’s way.

It was capped off by two massive free-throws by Keller. His foul-shots tied the contest at 73 with just over two minutes remaining.

For over two minutes, there was no score. The game was still tied at 73, when Finland’s Gerald Lee connected with a last second lay-up to silence the loud Hungarian support in the notoriously stuffy Szolnok Arena to snatch a 75-73 victory. 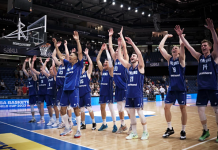 Igor Kokoškov and Aleksa Avramović: “We are all aware of our goal”