Matthew Dellavedova was unstoppable from beyond the arc (6/10) and helped Australia overpower Canada (92-108).

Dellavedova finished the match with a game-high 24 points, while five more players scored in double figures for the winners.

On the other hand, Khem Birch (18 points), Cory Joseph (16 points) and Kevin Pangos (14 points, eight assists) were the best players of the losing squad.

Yet, the Australians stood tall in the fourth quarter and never looked back. Playing very well on both ends, they went on a 15-32 run of their own and earned the victory.

On Tuesday (03/09), Australia will play against Senegal and Canada will face Lithuania. 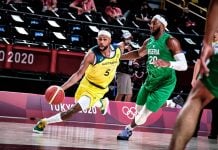