The top teams in Europe were drawn for the Eurobasket 2009. Defending champions Russia will face Germany, Latvia and a team from additional qualifying tournament. World champions Spain were drawn alongside recently underachieving Serbia, Slovenia and newcomers Great Britain.
Competition hosts Poland will test their skills against Eurobasket 2003 champions Lithuania, Turkey and Bulgaria.

Eurobasket 2005 winners Greece will be the favourites to win Group A where they'll meet FYR of Macedonia, Israel and Croatia. 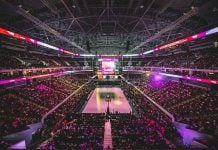