Damian Lillard led the Portland Trail Blazers to a new home victory against the Cleveland Cavaliers with a game-high 33 points.

The home team broke a two-game losing streak. Lillard had help from his teammates. CJ McCollum scored 19 points, while Jusuf Nurkić got his first career triple-double (10 points, 10 rebounds and 10 assists).

“The Bosnian Beast” also got a standing ovation (added five blocks) when he left the court, with two minutes remaining. The Cavs ran out of gas. The guest team played four of the last six games on the road.

Jordan Clarkson led the losing side with 22 points off the bench. Croatian center Ante Zizic scored 16 points with eight boards and two blocks.

The home team solved the key question of the game in the third quarter after they went on a 21-point lead. The final score was 129-112. 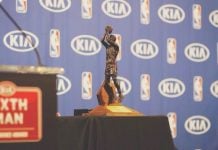 Lakers among the betting favorites to land Damian Lillard, per report

LeBron James to change his jersey number from No. 23 to...

Alex Caruso reportedly a target of the Cleveland Cavaliers in offseason