Olympiacos handed Real Madrid their first Euroleague defeat in the season, thanks to their excellent first half and some free throws made by Nigel Williams-Goss, took the victory against the European champions.

Rudy Fernández made his assessment of the game, talking to TalkBasket.net from his team’s locker room at the Peace and Friendship Stadium. For a moment in the third period, the injury-stricken Madrid team saw another of its members retiring from the game with a strong pain in his ankle, but Rudy managed to get back to the match.

Here is what the forward of Los Blancos said about the fortcoming derby against Barcelona Lassa. Fernández gave his impressions on the first defeat of Real in the Euroleague:

“I think that we abused the first part. The good defensive team that we are was not seen. They scored 52 points and our dynamic was not good. Then, in the second part, the effort we put was not enough. We have to stick to the face we showed in the second half. We managed to change the dynamic and we had the opportunity to win the game. Our last plays were all good choices. We attempted shots that we could have made, but we left the court with the taste that we fought in the second half. We have missed some free throws, but they also did the same. In this sense, we lost the game because of the small details. We knew that Olympiacos is not a team that scores a lot in the Euroleague. Therefore, it cannot be that they managed to score 52 points against us in the first part. The game changed for us in the second part, but they are a great team anyway”.

On the three absences (Llull, Ayon, Kuzmic) that Real Madrid had, due to injuries, he commented: “Well, the good thing about this team is that all 16 players are available to the coach: all of us who play on the court, even those who have travelled to Athens, have to take a step forward. There are players who are injured and cannot play, but we always have to be ready for the orders of Pablo (Laso)”.

On the three-pointers that Vassilis Spanoulis hit, he admitted that “it’s something we expected and we had to defend. In the second part we have been much better and this is what allowed us to be in the game”. 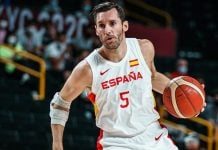