Two former NBA players, Jimmer Fredette and Pierre Jackson, put up a shooting clinic in the Chinese Basketball Association (CBA) game between the Shanghai Sharks and the Beijing Dragons.

For his part, Jackson had 63 points. Recently he had another scoring explosion with 67 points.

Two other former NBAers added 20+ points for each team – Luis Scola had 27 for the Sharks, while Shavlik Randolph dropped 25 points for the Dragons. 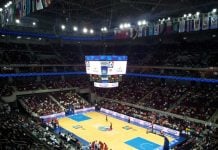 Rayjon Tucker will play in the NBL