The squad is headlined by four-time Olympic gold medalists Sue Bird and Diana Taurasi, who boast a total of five World Cup gold medals between them.

The nine-time FIBA Women’s World Cup winners begin their defence against Senegal on September 22 and are heavily favoured to retain their crown for a third straight time and claim a tenth overall.

“It’s a really hard process,” said USA head coach Dawn Staley. “Because, we’ve got great players and great people. So, they don’t eliminate themselves because of that. What it’s coming down to is, what is our most pressing need? And it changes from day to day, especially because we don’t have our entire team together yet.

“We’ll get a good birds-eye view of what that team looks like in the next few days, and I would say within 48 hours we should know, and we should have our roster locked in.

“All the players, from when we started out  in Columbia, South Carolina, to going all the way to D.C., and then taking 11 players from D.C. to here, they’ve all sacrificed. They all have given up their time.

About the 2018 FIBA Women’s World Cup

Winners of back-to-back World Cup titles and four of the past five FIBA World Cups, the USA owns a record nine gold medals, one silver medal and two bronze medals in FIBA World Cup play, while compiling an all-time 103-21 record at the event. In 2014, the most recent World Cup, the U.S. took the gold medal, while Spain captured silver and Australia won bronze. 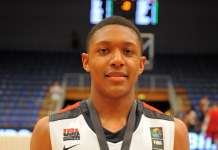 Jeff Green expected to pick up a $4.5M option with Nuggets