Per the Italian newspaper La Repubblica, the head coach of the Italian national team, Meo Sacchetti, was not satisfied with Danilo Gallinari’s decision to miss the World Cup Qualifiers in September.

“The absence of Gallinari is serious, like that of Belinelli. Marco told me that the next NBA championship with the Spurs will be very important for him and that he preferred to stay out. Others immediately responded to the call,” Sacchetti said.

“Gallinari must feel the blue, not in words but with facts,” the Italian head coach mentioned, adding that the president of the Italian Federation, Gianni Petrucci, couldn’t reverse this decision.

“Nothing could be done. The power of the NBA and the lack of will of the player are great obstacles. I was only hoping it would be simpler to deal with two games before the start of the NBA season. Let’s draw a line and do not think about it anymore.”

Celtics are expected to apply for a disabled player exception

Achille Polonara: “Danilo Gallinari is a big loss for us” 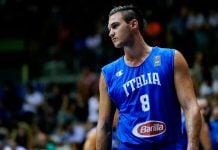