LaMelo Ball could be set to play for Zalgiris at the annual Adidas Next Generation Tournament (ANGT) should the parties reach agreement. Basketnews.lt reports that Lithuanian champions are interested in adding the youngest of the Balls for a three-day tournament.

“We had that idea [to bring LaMelo to the roster] after they signed the deal Vytautas. Truth to be told, I never expected it to become such a show. We are talking about a possibility to loan him for the EuroLeague’s tournament during which quite a few players from other teams plays for us”, Zalgiris GM Paulius Motiejunas told to basketnews.lt

Kaunas will host one of the four qualifying rounds on January 19-21. The other hosts are L’Hospitalet, Munich and Belgrade. Zalgiris have won one ANGT title 2012 and reached the final once in 2009.

The 16-yeard-old will face some of his potential ANGT teammates tomorrow in Vytautas Prienai as his side Vytautas takes on Zalgiris-2. 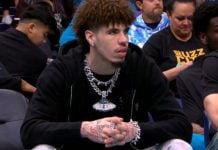