The moment Durham Palatinates was announced as the Women’s British Basketball League newest franchise, the cult following of the sport across the country were racking their brains trying to fathom why the team was called a Palatinate.

It is certainly innovative. Durham, a city located in the north-east of England, slightly south of Newcastle is rich in history. But the Palatinate, Durham head coach Lee Davie explains, highlights the university’s colours that define Durham.

The palatinate is a light purple or lavender that is used as their academic dress. A palatinate blue is also plastered in County Durham’s official flag.

“It’s a shade of purple closely associated with the university and derived from County Durham’s political history as a County Palatine,” Davie explains. “The university’s annual sporting colours are “Palatinates” and Durham University teams have long been referred to informally as ‘the Palatinates’.”

But all colours aside, the announcement of the professional women’s franchise has been a while coming, given the success of the university program. Durham has a wide variety of university basketball teams with different skillsets. The women’s programme has a second team that play in the Northern 1A conference and are headed by the first team that play in the BUCS Premier North division. It’s a challenging division but the girls are considered one of the top teams in the country headlined by finishing the academic year with an 8-2 record last term, and coasting through the Super 8s but narrowing losing out to Loughborough in the finals.

However, Durham are at home when competing in the BUCS Super 8s, the focal point for university basketball in the UK. The women’s first team has appeared in the event since its inception and Davie feels that adding a professional outfit will give those players something else to play for. From September 2018, the team plan to compete and train out of the Durham University Sports Park, Maiden Castle, which, pending planning permission, will include a brand new 2,000-seat indoor venue.

It certainly is an exciting time for basketball in Durham.

“In my time here at Durham we have been one of the top three women’s university teams in the country, without the WBBL,” Davie said. “We see the addition of competing week in and week out against the best players and teams in the WBBL as the final piece to becoming the number one university for women’s basketball in the country.”

But as successful as both their men’s and women’s university teams are, the pro ranks are a different story for Durham. The Palatinates will be the city’s first professional women’s team but over on the men’s side, the Durham Wildcats graced the BBL from 2011, filling the spot of the Worthing Thunder, who withdrew from the league, to 2015 when players, who were called up to the team on international student visas were found to be ineligible to play.

Davie, who coached the Wildcats in their final two seasons and led them to their first Playoff appearance in his first season in charge is adamant that a professional men’s team is still on the cards but there is still a lot of work to do, commercially before a roster can be put on the floor.

“We remain entirely committed to getting a men’s programme back into the BBL but having been in the league for four years we know that it is a significant undertaking,” Davie explained. “Whilst we feel that we have a model that will enable us to sustainably recruit a competitive playing squad but we still have a lot of work to do commercially before we look to step back in.”

It will take a few years for Durham to be fully reacquainted with the professional ranks, something that Davie wants to happen in order to compliment the booming university program that they boast. Davie understands that this is something that won’t happen overnight, but his vision to give the historic county professional basketball again is going in the right direction.

And people won’t be scrambling to find out why the team was called a ‘Palatinate’. 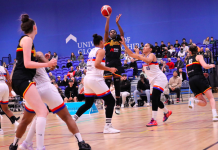