Ojeda has an impressive resume as he comes to the German capital from the Atlanta Hawks where he was the international director of scouting.

“I am pleased that we were able to have him here for us,” ALBA Berlin manager Marco Baldi said. “He is an expert who has worked for many years in international basketball. It fits us well and he meets our requirements.

“He will strategically develop our sports program together with the coaching staff. We thank the Atlanta Hawks who were cooperative enough on the matter of dissolving his existing contract”.

The Spanish supremo has also worked as an assistant coach and general manager for Gran Canaria and has also been sport director of Estudiantes. 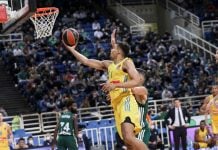