Limoges has signed veteran guard Bo McCalebb on a season-long deal which has cleared the way for Leo Westermann to leave the French side and join EA7 Milano.

A seasoned Euroleague veteran, McCalebb, was a former Alphonso Ford Top Scorer Trophy winner, leading the competition with 16.9 points a game while playing for Montepaschi Siena in the 2011-12 season.

McCalebb also helped lead underdogs Partizan Belgrade reach the Final Four in Paris in 2010, and also in 2011 with Montepaschi Siena and he currently ranks in the Euroleague’s top 10 in total points (eighth with 1,390) and in steals (third with 173).

McCalebb though has only played one Eurocup game in his career, and that was last season when he was with Bayern.

The arrival of McCalebb to Limoges looks likely to see Westermann, a promising French international to move to EA7 Milano, who enter the Eurocup after a woeful Euroleague campaign, where they finished bottom of Group B with a 3-7 record.

Bayern begin their Eurocup campaign by facing Turkish outfit Banvit, while Milano face a tricky tie away to ALBA Berlin. 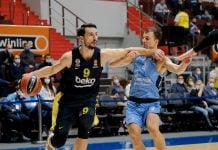 FC Barcelona feels ‘cheated’ by Thomas Heurtel and his agency, per report