Phoenix was consistent on offense from start to finish, had Covington leading the way with 21 points and 10 rebounds, and as a result they reached their 8th win this season.

Decisive 3rd period for the visitors as they had a partial 12-24 score in an equal until that point match, to get the win on the road against Lowen.

Poor offensive display for Mitteldeutscher in front of their home crowd, resulting into their 14th defeat, losing ground to their fight to avoid relegation. Skyliners continue their positive streak.

Bayeruth took advantage of their home ground and locked down their opponents right after the tip-off, got strong 21-9 lead and they built on to it to reach the win and create a bigger distance from the relegation zone, while their opponents sank into it.

Anxious start for the home team that failed to make their shots count while Bayern was on fire offensively to get on the driver’s seat and stay there until the end, securing a win that was predicted to come for the Bavarians. John Bryant was the MVP with 17 points.

Wurzburg did their best to defeat Alba at home but Dragan Milosavljevic was unstoppable and with his 27 points, he led the visitors to a big win in a tight game.

Ludwigsburg stormed past the Merlins by playing total basketball on both sides of the court, giving their fans a great performance to end 2015.

Oldenburg stayed focused all along the match, making sure they had control of their opponent and with some good offensive totals, they escaped victorious form Giessen. 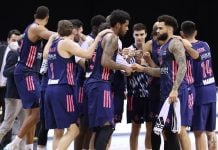 Real Madrid retains fourth place in the standings after win vs ALBA Berlin – EuroLeague Round 23: Results and Highlights