The Atlanta Hawks have been bitten by injury bugs at their starting frontcourt.

John Collins will be out for at least two weeks due to a left ankle sprain, the club announced on Thursday. Collins sprained his ankle on the Hawks’ Wednesday win against the Orlando Magic, exiting in the first half with six points and seven boards in 17 minutes played.

In this season stuffed by trade rumors, Collins is averaging 12.3 points and 7.5 rebounds while shooting 48.4 percent from the field. In 3.3 attempts per game, he is averaging a career-low 21.9 percent shooting from three-point territory.

Meanwhile, De’Andre Hunter will be absent for at least one week due to a right hip flexor strain, an injury he sustained against the Magic also.

For his part, Hunter is averaging 14.9 points, 4.0 boards, and 1.3 assists in 21 games played. He inked a rookie scale extension with Atlanta last offseason worth $95 million in four years.

With their absence, Frank Kaminsky, Onyeka Okungwu, and starting center Clint Capela are expected to split up their rotational minutes. 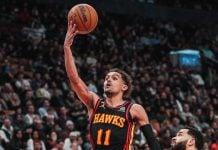