Ben Simmons is set to play in Philadelphia for the first time since getting traded to the Nets just before last season’s trade deadline.

The 26-year-old point guard is not expecting a warm welcome from the local fans. Even while he was a Sixer himself, Simmons received boos for the home crowd. Being a visitor will only elevate that.

76ers head coach Doc Rivers thinks that it will be a good atmosphere at Wells Fargo Center, regardless of the team’s former number one draft pick being on the opposing team.

“Our fans will be our fans anyway, so it’ll be that type of atmosphere,” Rivers said, via Noah Levick of NBC Sports. “Ben’s playing great now, so we don’t want him to play great.”

Rivers also said that Simmons being on the Nets roster could be additional motivation for Joel Embiid. “They’ll get their chance. It’ll happen at some point,” he said, per Gina Mizell. “But it still has to remain, at the end of the day, the 76ers want to beat the Nets, period. And maybe with (Simmons) on there, you want to beat them more.

“If I was a player, that’s how I would feel. I unfortunately can’t play, and you don’t want to see that.

In his latest game for Brooklyn, Simmons scored season-high 22 points and appears to be getting out of the early season slump. 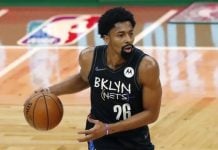