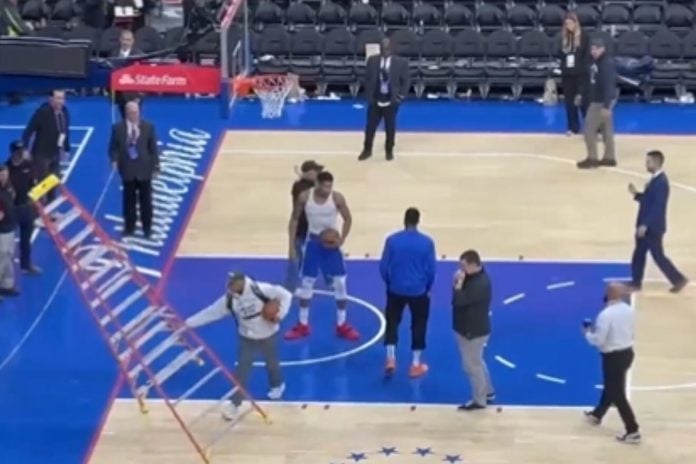 After a disastrous display at the charity stripe, superstar Giannis Antetokounmpo was frustrated after his post-game free throw shooting was disrupted by Wells Fargo Center workers on Friday

Moments after his Milwaukee Bucks fell against the Philadelphia 76ers, 110-102, Antetokounmpo stayed on the floor to practice his free throw shooting. Suddenly, the workers placed a ladder in front of the rim for probable preparation for Philly’s next game, which appeared to be irritating for the Greek sensation.

The employees proceeded by pulling back the ladder, which prompted Antetokounmpo, out of being upset, to strongly shove the material aside to continue his ritual.

His action was caught by Sixers fans, with the video already going viral across the league’s social media circle. As such, Antetokounmpo has drawn mixed reactions to his unexpected behavior.

Antetokounmpo only drained four of his 15 free throw attempts in their loss against the Sixers. He is shooting a career-low 62.1 percent in the line out of 12.7 attempts per game.