Two-time NBA champion Dwyane Wade has been sued by his ex-wife Siohvaughn Funches-Wade who is asking the court to stop the transition of their 15-year-old son Zaya (formerly Zion) who claims to be transgender, as reported by Jennifer Smith of Dailymail.com.

The kid’s mother claims that the Miami Heat legend is exploiting their son for financial gain. Since coming out as transgender in 2019 at the age of 12, Zaya has been getting lucrative modelling deals.

According to Funches-Wade, her ex-husband told her in April “that a lot of money had been already made and that additional money will be made in relation to our child’s name and gender issue.”

His name was legally changed to from Zion to Zaya in August. Now Wade reportedly also wants to legally change his gender. The mother wants her son to turn 18 before the change is made.

Dwyane Wade: “[LeBron James] won’t allow anybody to be better than him” 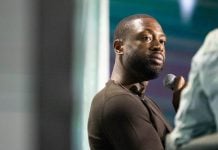