Taking his act up front in place of the injured franchise star Damian Lillard, Shaedon Sharpe didn’t disappoint when the bright lights were directed to him.

Starting for the first time in his young, rookie year, Sharpe was slided by head coach Chauncey Billups to be with Anfermee Simons, Josh Hart, Jerami Grant and Jusuf Nurkic. This assignment gave him the best in front of the energetic Moda Center crowd in facing the Houston Rockets.

Sharpe fired a barrage of highlight reel finishes, including a pair of back-to-back dunks that made fans roar in excitement. He compiled 14 points in the Blazers’ 125-111 dub over the Rockets.

Sharpe explained the thunderous experience he had, making Lillard excited to what he saw.

“I feel like the first one was way better than the second one, but I don’t really grade them,” said Sharpe. “I just felt like I really elevated.”

“I though Shaedon played well,” said Billups about Sharpe. “He’s just must-see TV, you never know what he’s going to do when he gets that runway like that. He made a couple plays that got the crowd going but I thought he was solid overall.

With Lillard still out for around two weeks, the Blazers will look to rely more on Sharpe, as they face the gritty Memphis Grizzlies team on Wednesday. 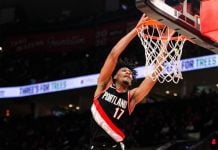