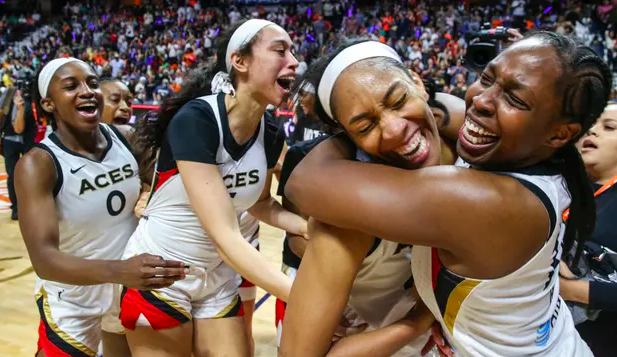 Las Vegas Aces won their first ever WNBA title in the early hours of Sunday morning as a 78-71 win at the Connecticut Sun, sealed a 3-1 series win.

The championship win finally gives coach Becky Hammon some gratification. For years, a solid assistant to San Antonio Spurs’ Gregg Popovich, she looked likely to break the boundary and become the first female head coach in the NBA.

Unfortunately, it never materialised. However, the WNBA and the Aces gave her a shot.

Hammon took full advantage. And in doing so, becomes the first person in WNBA history to win a title in her first season as a head coach.

Taking the first two games, Las Vegas looked to be in control of the series, until Game 3 when the sun shone bright in Connecticut – too brightly for Las Vegas – and as a result, a 106-75 massacre gave the Finals new life.

But Las Vegas had an ace their sleeve for Game 4. Her name was Chelsea Gray.

The point guard shot an accurate 69 percent from the field on her way to a game-high 20 points in turned out to be the decider. Gray also added six assists and five rebounds to her tally.

For her efforts, along with an average of 18.3 points throughout the playoffs, Gray unsurprisingly scooped Finals MVP honours.