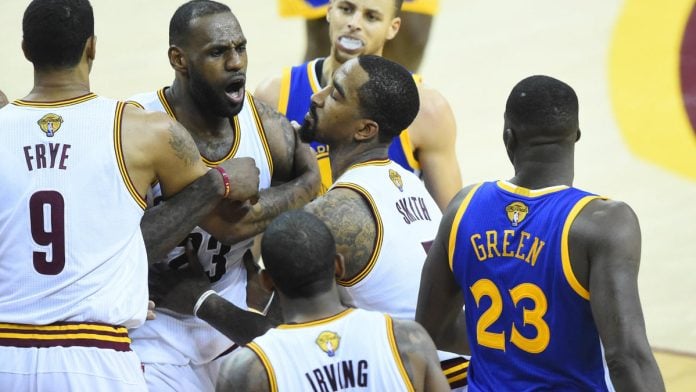 It’s been over six years that have already passed and Draymond Green has contemplated and made a look back on the painful crumble of the Golden State Warriors in the 2016 NBA Finals.

Green gets real and admitted in his appearance on the “Checc’n In” podcast that his suspension pulverized the Warriors’ hopes for a back-to-back supremacy.

“Would I do it again? One thousand percent.”

The Warriors were on the cusp of clinching another title after taking a commanding 3-1 lead heading home to Oakland, but they were stunned and unable to capitalize upon the league’s decision to suspend Green.

Upon his heated altercation with LeBron James after a hitting and tangled incident in the dying minutes of Game 4, Green was slapped by a Flagrant 1 foul, triggering an automatic suspension in Game 5 as he hitted four total flagrant penalties in the 2016 postseason.

It is very well noted that Green, not Stephen Curry or Klay Thompson, was the Warriors’ best player in that title series. His all-around impacts covered the franchise woes in light of Curry and Thompson’s problematic performances.

Since then, the rest was history. The Dubs turned to ashes in a notorious way possible, as the Cavs built momentum in their Game 5 victory inside the Oracle Arena, dominated Game 6 on their home floor and pulled off one of the greatest feats in the history of the NBA in the seventh and final game.

As such, Green made it known that he’ll continue to do it if given a chance, but will be mindful enough of what would be the officials’ verdict.

“If somebody tries to step over me, I’m going to try to hit them,” Green said on “Checc’n In.” “What I wouldn’t do again is, I wouldn’t allow myself to be in a position to where someone can make that decision and cost me.

“And so guess what? If I get to that point again and you step over me, I’m going to try to hit you again. But I wouldn’t be in the same position with flagrant amount of points, with the amount of techs to where I leave that decision in someone else’s hands.”

That moment will remain haunting as it is on the memories of Bay Area faithful, but Golden State still managed to avenge their 2016 Finals loss – winning three more NBA titles, with one being clinched last season.

Sports is filled by lopsided moments, and Green’s notorious move only proves that even a single action truly impacts the fortunes of every single team involved.

At the end of the day, this incident will continue to be talked about in the “What if?” discussions of the curious basketball fans. As such, it is what it is.