According to Jovan Buha and Sam Amick of The Athletic, the Lakers have targeted Bojan Bogdanovic, Jordan Clarkson and Malik Beasley that are among the players that the Jazz are looking to offload before the season.

It was reported earlier that Utah is no rush to trade these and other players and are open to start the season with them on the roster and see how the team is doing.

For their part the Lakers are not finished with building their roster and are in talks with other teams on potential trades.

Paul Pierce: “I don’t even think the Lakers are going to be a Top 8 seed” 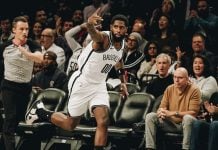