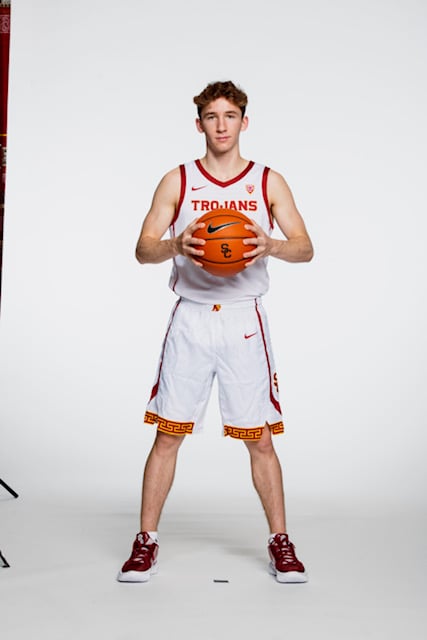 The Trojans players have returned to campus following their month of summer workouts and starting their school semester of the 2022-2023 season. They look to begin their quest to win a Pac-12 Championship and return to the tournament. Zach Brooker looks forward to his junior year and the opportunities in the upcoming season with the USC Trojans following an NCAA Tournament appearance.

Brooker is a California native of Los Angeles attending Sierra Canyon High School in Chatsworth, California, with teammates including a variety of NBA and Division-I talent like himself. During his time at Sierra Canyon, he played an integral role in setting the winning culture that is still present today and helping the school bring championships. He was an essential spark off the bench for the trailblazers providing defensive assignments and sharpshooting. Brooker is a two-time open-division champion, Marmonte League second team, All-Ventura County All-Academic selection, and a National Junior Honor Society Member.

During his season, Brooker decided to transfer and attended Calabasas High School, where he averaged 20 points per game in his senior campaign. After this, Brooker joined the USC Trojans and now enters his junior season.

USC has key losses such as Isaiah Mobley, who was drafted by the Cleveland Cavaliers, and Chevez Goodwin, who signed to play professionally in Greece. Besides those two losses, the Trojans return their roster.

The Trojans have their hands filled this year with a home and away series with Auburn and attending the Battle of Atlantis. Brooker is excited for this upcoming season and the opportunity to return to the tournament and make a deep run. Brooker feels “this team is very deep and skilled; it is great to be a part of such a great group of guys.” He says.